In order to measure colour the Commission Internationale de l'Eclairage (CIE) also
created the CIE 1931 Chromaticity Diagram (figure on the right) that represents
all the colours that the human eye can perceive. The curve that forms the periphery,
or edges, of the diagram, is called the spectral locus.
The spectral locus corresponds to the spectral colours in the visible light spectrum
and contains the wavelength values.

The CIE diagram is a two-dimensional chart specifying chromaticity by using
X and Y coordinates. The CIE Diagram represents colour as seen by the human eye
in full daylight. The spectral colours are located on the outside the horseshoe
shape curve (spectral locus). The colours located in other areas are not spectral.
For example the bottom straight line represents a line of purples, while the
interior are unsaturated colours: a mixture of a spectral colour and a grayscale colour.

Monochromatic light (consisting of only one wavelength) is, by definition, fully saturated.
Single LEDs are essentially monochromatic and, therefore, produce saturated light.
However, when multiple LEDs of different colours are combined to get another colour the result is unsaturated light. 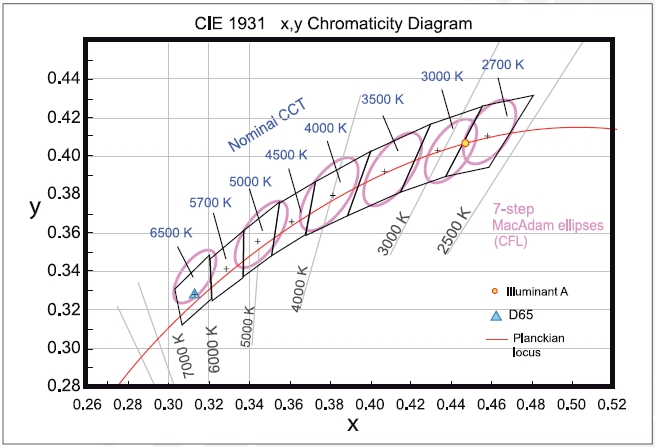 The human eye can detect very subtle changes in colour, down to
~10 nm for red and 2 to 3 nm for green. For white light LEDs,
this sensitivity may or may not be an issue depending on the application. For example, in applications like flashlights and
headlamps matching the exact chromaticity of white light is not as critical as that of an application using a string of a dozen or so HB-LED modules to light a wall in an office building. If the LEDs aren't matched properly they will produce a kind of rainbow of different shades of white light on wall. This problem doesn't exist with an incandescent lamp since it produces a wide range of frequencies. To minimize this potential problem vendors provide binning charts.

Binning is the process of methodically sorting and grouping LEDs according to some measured parameter or set of parameters.
This allows design engineers to systematically specify an LED and it allows the manufacturer to order LEDs that function consistently like the specified part. Binning also makes it possible to re-order LEDs that match the original.

Binning diagrams employ geometric regions on the CIE 1931 Diagram arranged along the BBL to specify chromaticity coordinate variation for specific The BBL in the figure hereunder is the line on which the colour temperatures for white light from sources with a CRI of 100 will lie. The lines labeled 5000K through 10000K are the lines of CCT. Each of the regions, such as WA, WB, and WC, represents two kinds of colour variation. One is the CCT variation (for example, 5000K to 5700K in WH and WJ). The other variation is called tint, indicating how far the chromaticity coordinates are from the BBL.
The top of region WG, for instance, would have a slightly more greenish tint than the bottom. The bottom of WP would have a slightly more purplish tint than the top. WD, in between WG and WP, would have a smaller range of tint. Nevertheless, WG, WD, and WP are all in the same CCT range. Chromaticities that lie directly on the BBL do not have a tint.

Supplier and Customer View of Binning

Chromaticity bins are technically set up as a function of an LED supplier's production yield. Customers can use them, however, to specify and reorder parts. Rectangle WE contains the chromaticity coordinates CCy = 0.33, CCx = 0.30. It also contains CCy = 0.32 and CCx = 0.29, and many others that intersect within it. For a given customer application, the light that any LED emits whose chromaticity falls within the region WE, will be considered a match for the light from any other LED whose chromaticity coordinates also fall within region WE.